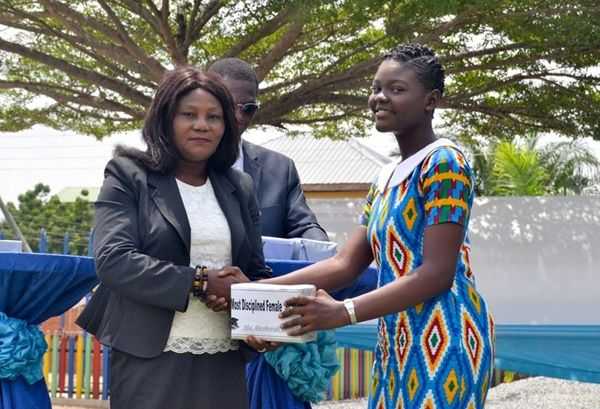 About 49 pupils completed their junior high education while 26 from the Kindergarten joined the mainstream of the Kasoa-based school.

He aligned himself with a popular quote by Tryon Edwards that “The great end of education is to discipline rather than to furnish the mind; to train it to the use of its own powers, rather than fill it with the accumulation of others.

According to Mr. Okechire, society is faced with a generational problem where parents are not contributing to raising a disciplined society.

“We face a generational problem of sparing the rod and spoiling the child, and the overindulgence nurtured by globalization. It is this that we have to confront, to be able to make our children the good future leaders that will succeed us,” he said.

He added that parents have no choice than to discipline children since the schools and the government have been restricted by external cultures.

The Chairman of Ghana Education Service Council, and guest of honour for the occasion, Michael K. Nsowah, admonished graduates to be true to their training.

Mr. Nsowah revealed that a new curriculum that would be implemented in September this year, takes into consideration discipline and moral ethics.

According to him, aside a shift in the new curriculum from the objective-based learning to a standard-based one, the curriculum as part of its components will place emphasis on core values like honesty and responsible citizens, knowledge and love of God, respect for others, as well as persistence and resilience among children.

Afia Ahenkorah Manful and Derrick Asamah were awarded for being the ‘Most disciplined’ female and male students respectively.

Afua Mawuse Adanu was adjudged the overall best student in the 2019 graduating class.

The Chancellor and Founder of West End University College, Mr Joe Adjekum, in a speech recognized the support of the parents in the success of the graduating class adding that, “Coming together is a beginning, keeping together is progress and working together is a success.”

Mr. Adjekum who is also the Chancellor and Founder of West End University College, “I always say, we don’t teach children here, but we educate them because teaching is just for academic purpose but education covers the holistic training and development of the potentials of the student.”